A Brief History of Wax Prints

West African fabrics and wax prints have an interesting and (literally) colourful history. West African textiles have always existed, but it was Dutch settlers in the 19th century who helped contribute to and create the designs we would recognise today.

Traditionally, the wax was applied to fabric in places that the manufacturer didn’t want the dye to penetrate, then dye is applied over the top of this to create beautiful, colourful and intricate designs. Today, a lot of wax prints are created digitally, allowing the manufacturer to produce a wider range of designs in far greater quantities, although the traditionally made fabric is still available, albeit rarer than it used to be. This method was originally used in Indonesia in Batik printmaking, although slight adjustments were made to the process to speed it up, creating Dutch wax prints. 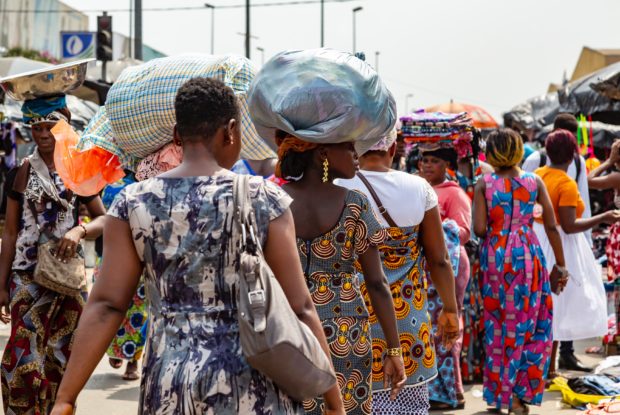 The Dutch colonialists were responsible for this new wax process, and indeed, African wax fabric owes just as much of its history to the Dutch as it does native Africans. As mentioned above, the Batik process was replaced by Dutch wax process, as part of the industrialisation of the fabric making industry by the foreigners at the time. The Dutch ships would load up with Batik fabric from Indonesia and sell this in Africa. Traditional African designs eventually influenced these fabrics and they became more and more colourful over the years.

The patterns on the cloth are not always random. These were used by African woman to convey certain messages or indicate social standing. Each different pattern represented something specific and certain patterns were created and worn for specific events, such as weddings, parties and funerals. These prints were adopted by wealthy Africans and worn at glamourous events and state banquets. In the 1920s, new, more detailed prints began to appear on the market, such as pictures of local leaders for subjects to buy and honour them on special occasions.

Wax prints are great for all occasions, not just traditional events, and are now being used widely in western fashion and on the catwalk. Empire Textiles has a wide variety of these prints, along with a wide range of other fabrics such as voile and lace. Discover our stock today.